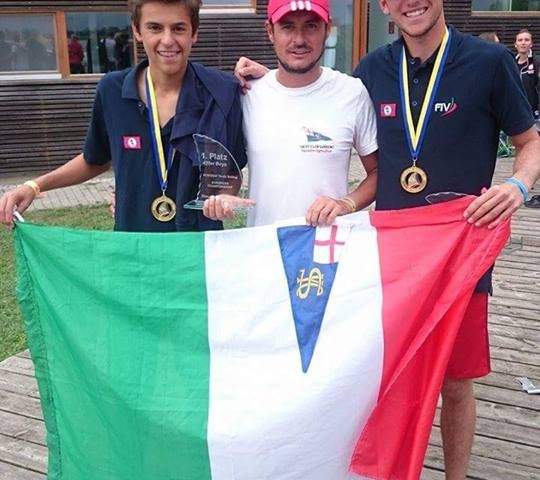 It was concluded a few days ago the 5th European Youth Championship Eurosaf, organized by Austrian Sailing Federation, which took place August 15 to 21 at the Austrian federal center on Lake Neusiedl am See.
Four participating classes (420, Laser Radial, 29er and RS boards: X), for a total of about 110 competitors and 8 countries: Austria, Italy, Germany, England, Romania, Czech Republic, Slovenia and Poland.
It won the prestigious gold the Sanremo crew of Andrea and Fabio Abbruzzese Boldrini, coming off an outstanding season during which they have carried before finishing in 13th place at the World Championship held in Marina Aregai last July, only to win European youth league Eurosaf 2016.
The boys have proven perfectly capable of dealing with the weather conditions are not easy (regattas with gusty winds in the early days with 6/8 knots until the grand finale with peaks of 25 knots and 13 degrees) and the height of the event, winning the championship with a day and a test in advance on opponents, achieving a total of 25 points out of ten trials, with 15 points ahead of the runners, the English Clementson James Tomlinson and Win of Hayling Island Club, and 20 points on third parties, Austrian and hosts Kampelmuhler Nikolas and Niklas Habelr of YCP Austrian.
Yet another title for Team Yacht Club Sanremo which confirms international at youth level leader.
Congratulations to Andrea and Fabio and heartfelt thanks to the coach Davide Ortelli who has accompanied and supported them in this wonderful victory.
Next date signed 420 class in Termoli, from 8 to 11 September, where the Yacht Club Sanremo will be represented by no less than 9 crews.