During the long Easter weekend, the second selection was held in Formia (LT) to gain access to the 2021 World Championship in the 420 class. Over 100 boats from all over Italy were present at the event to win a place in the team national. The competitive team of the Sanremo Yacht Club once again presented itself in Formia (LT) as the largest and one of the most prepared to gain access to the World Championship with various crews. The regattas were held in various weather conditions from 5 to 25 knots of wind putting a strain on all the crews. Despite the harsh weather conditions of the 3rd day of the race, the “mixed” crew of the Sanremo Yacht Club composed of Tommaso Cilli and Helena Zerykier won a great 1st place in the mixed crews and 2nd place overall, which after the first selection held in Follonica, which […]
Do you like it?0
Read more 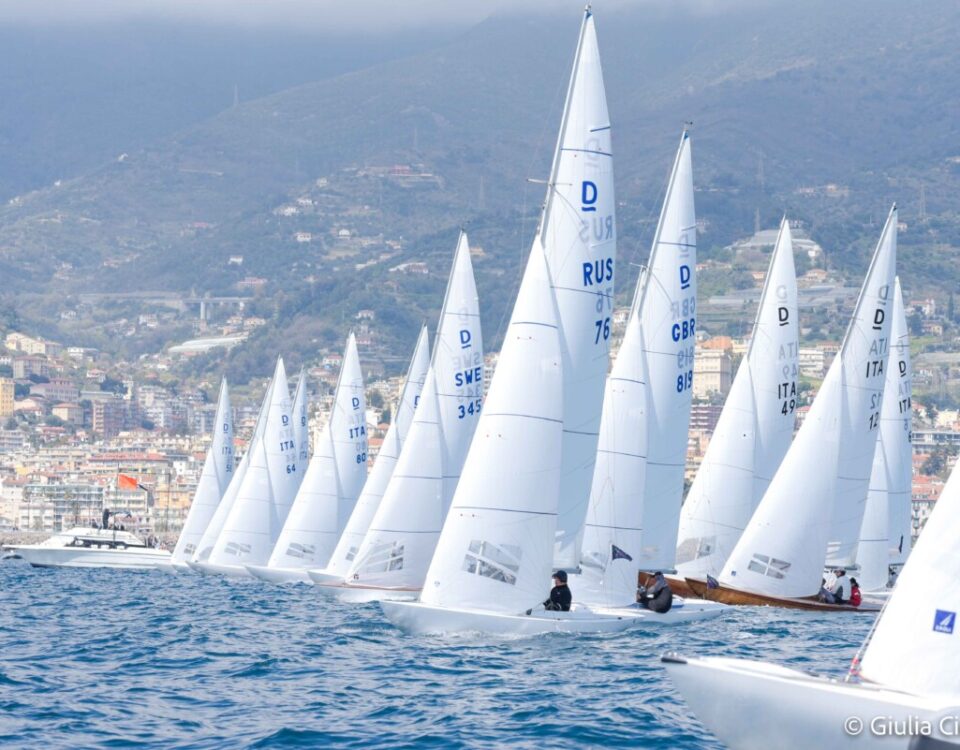 A nice east wind characterized the last day of the Dragons regattas in the Gulf of Sanremo. A finale that highlighted the most trained crews with strong winds. Two beautiful races and a final classification with important names at the top: The Paul & Shark Trophy was won by the Swiss Wolf Waschkuhn SUI318 1QUICK1, followed by POR 83 by Tovar Mirskye, and in third place GBR 819 FEVER by Klaus Diederichs. First Italian ITA 6 YANEZ by Giuseppe Duca. The first Corinthian was also awarded, namely GER 1058 SABINE IV, by Kai-Michael Schaper and the first classified Classic, ITA 49 JAVELIN, by Fabio Mangione. This beautiful event was made possible thanks to the collaboration with Portosole Sanremo and the precious support of the Municipality of Sanremo. The Dragons will return to Sanremo with a new appointment in our calendar, at the request of the racers, from 23 to 25 […]
Do you like it?0
Read more 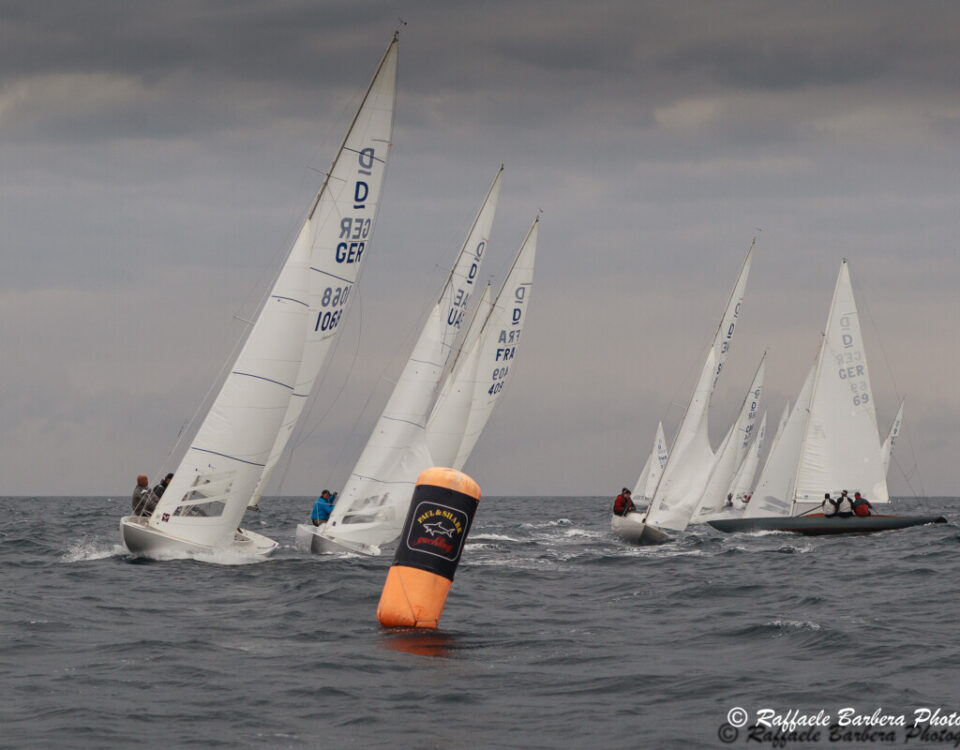 In a very difficult year for all events, especially the international ones, on the occasion of the International Italian Dragon Cup, now traditionally sponsored by Paul & Shark, many athletes from different nations have chosen to go to the Riviera di Ponente to compete in this now traditional appointment. Swiss, German, Russian, French, Swedish and even an Australian crew, as well as of course the Italians, will take to the water to compete in the first regattas on Thursday 25 March. The level of participation is very high: from the Russians Samokhin and Loginov, already winners of a World Championship, to our Diego Negri and, the newcomer in the class, Tommaso Chieffi, just to give some examples among the many Champions who will race with this elegant boat that for more than 90 years it has attracted the great names of world sailing. Among the well-known faces also the President […]
Do you like it?0
Read more 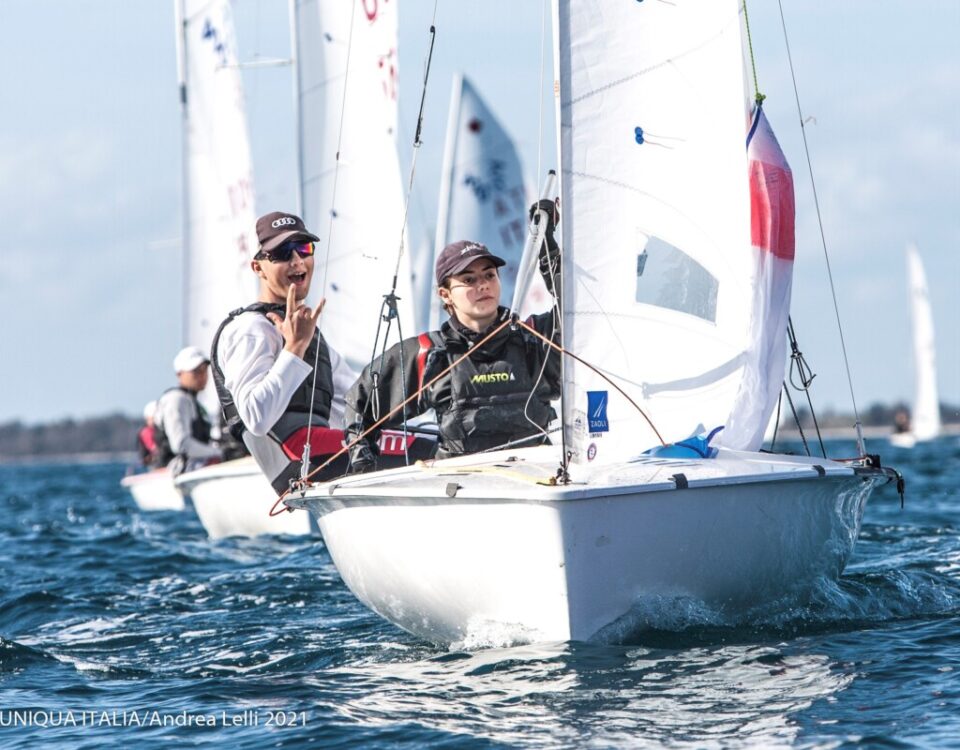 The 2020 sailing season was completely swept away by the storm that hit the whole planet, shattering dreams, expectations and unfortunately also many loved ones. As in all human activities, a return to normalcy is sought in a life that only now we understand how beautiful it was. After more than a year of absence from high-level regattas, the light comes back on the youth premier class: the “420”. The first selection regattas for the 420 class World Championship took place in Follonica (Grosseto) over the past weekend, to be held in Italy and in Sanremo from 2 to 10 July 2021. In Follonica they presented themselves at the start 96 boats ready to battle for a place in the national team. The Sanremo Yacht Club showed up for the appointment with the largest team in the championship with 14 boats (28 athletes) and 3 coaches. The regattas were very […]
Do you like it?0
Read more 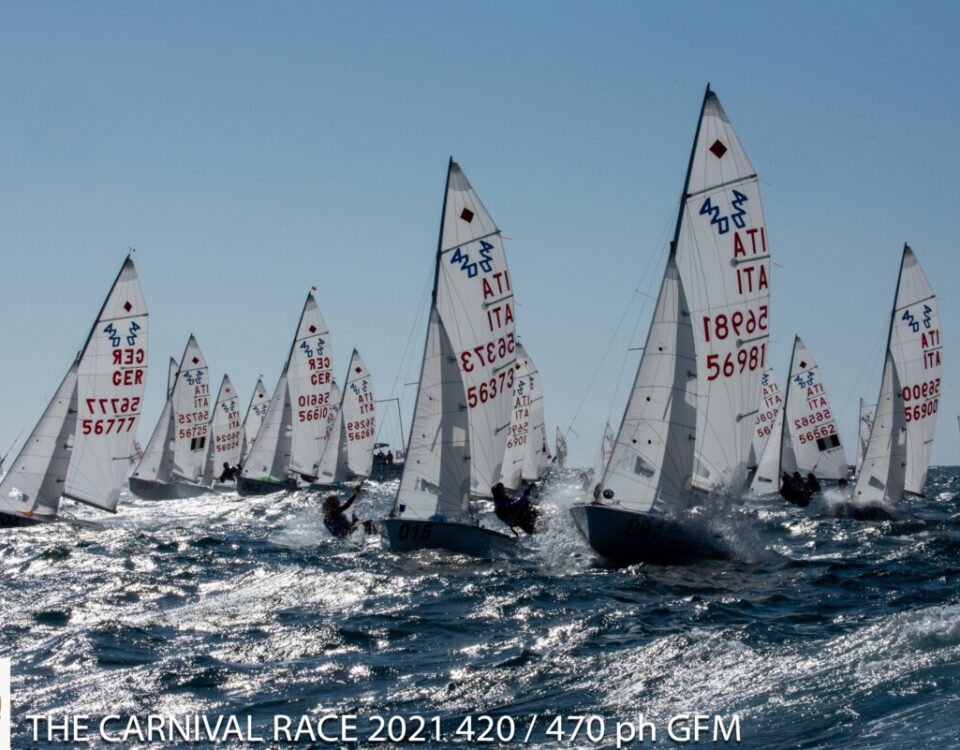 Concluded the “The Carnival Race” organized by the Yacht Club Sanremo

420 & 470 THE CARNIVAL RACE Yacht Club Sanremo 18/21 February 2021 Concluded the “The Carnival Race” organized by the Yacht Club Sanremo Four tests for the 470s and three for the 420s at this edition of the Carnival Race where the wind dominated both for lack and excess. But the tests carried out on Saturday were splendid with winds between 14 and 18 knots, all regular departures and three beautiful regattas. In the 470 class, the Italian crew of Maria Vittoria Marchesini and Bruno Festo returned to land with 3 first places. On Sunday the strong east up to 32 knots put a strain on the crews of this class who managed to finish only one race and therefore the final victory for this mixed crew, with three firsts and a fifth. Second in the final standings, but winners of Sunday’s test fought with very strong winds, Cricchiutti / […]
Do you like it?0
Read more 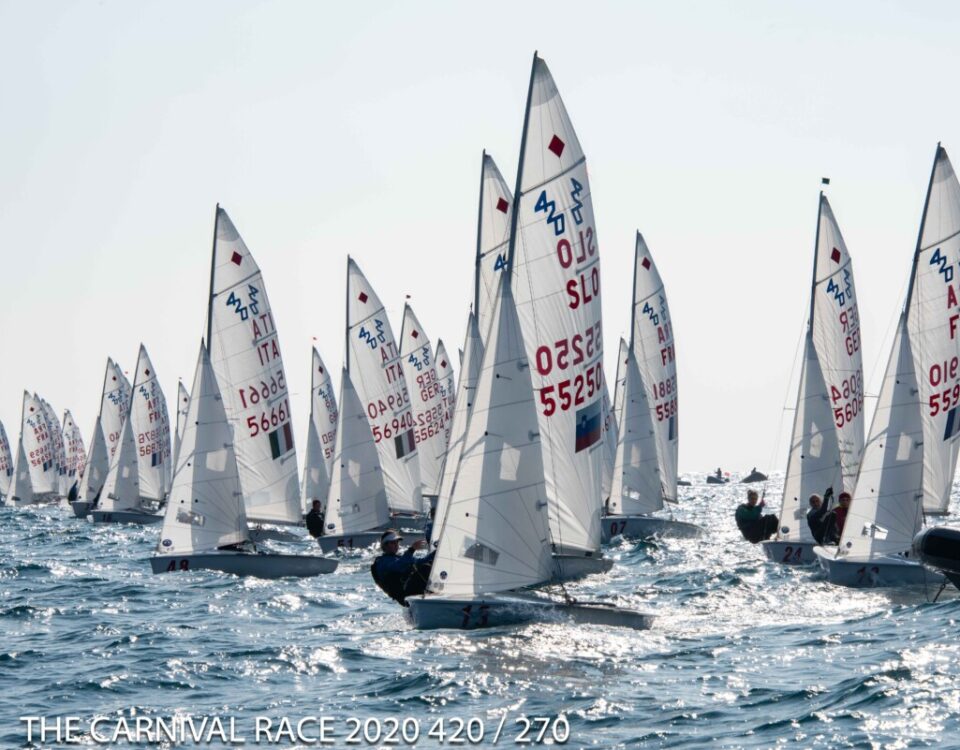 More than one hundred appearances at the “420 & 470 The Carnival Race”, organized by the Yacht Club Sanremo.

In a particularly difficult year for all sectors, the great effort of the Sanremo Yacht Club in organizing large events was rewarded by the number and origin of the members. The regatta, in fact, has been included in the Eurosaf circuit: 4 events in 4 different European countries, a source of pride for the organizers. More than one hundred boats from various countries will compete in the waters of Sanremo from Thursday 18 February on the occasion of the “420 & 470 The Carnival Race”, a traditional appointment for the 420 and 470 classes. There are currently 8 participating nations: Turkey, France, Poland, Spain, Slovenia, Switzerland, Germany, and of course Italy. Many athletes will arrive to train as early as this weekend, staying in our city for 10 days, bringing some breathing space to the agonizing tourism sector. Traditionally this event has always taken place in Marina degli Aregai but, […]
Do you like it?0
Read more 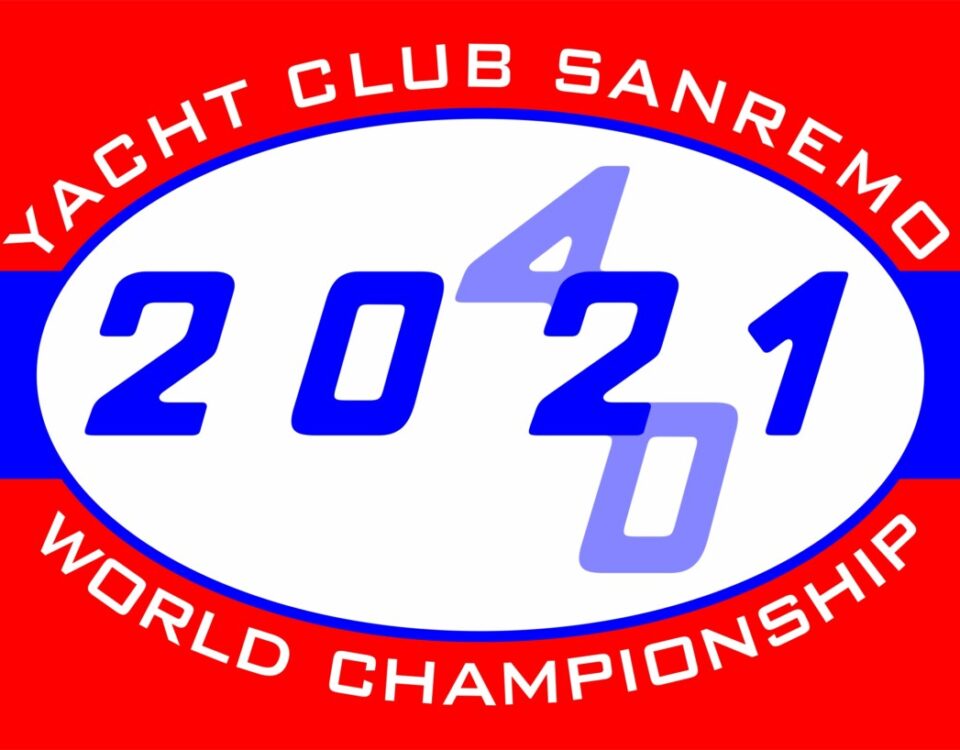 The International 420 Class Executive Committee are pleased to announce that the 2021 World Championships will be held at Marina Degli Aregai, San Remo, Italy from 2 – 10 July 2021.Organized By Yacht Club Sanremo.
Do you like it?0
Read more 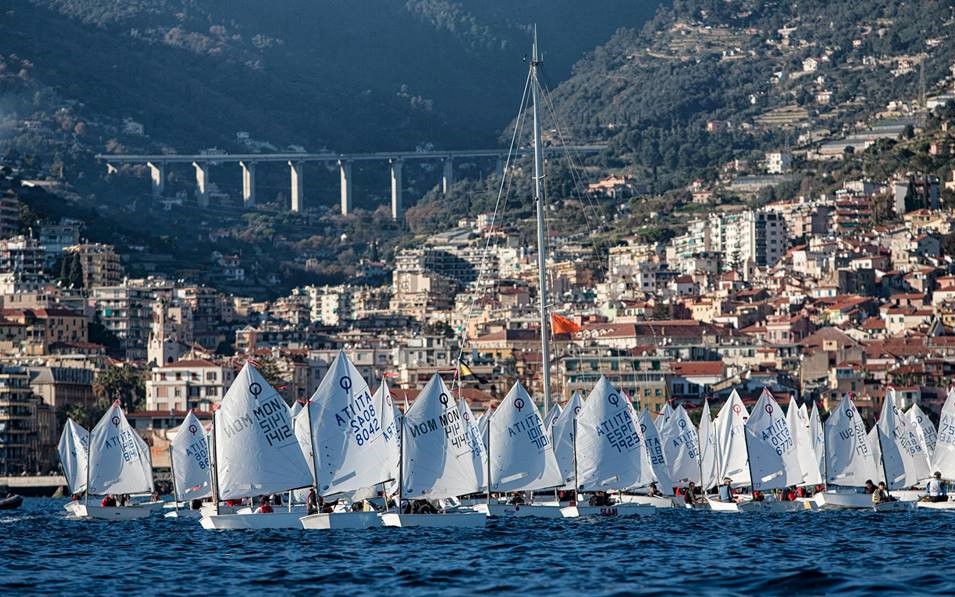 Exceptional weather conditions and great participation were the setting for this traditional event organized by the Circolo Matuziano and now in its thirty-sixth edition. More than 100 Optimists battled it out in six beautiful regattas with winds every day from the west between 12 and 20 knots. Challenging, thanks also to the rough sea of ​​the second day, the regattas were really exciting and many were the compliments made by all the coaches who arrived in Sanremo with their teams. To be awarded, both for the Juniores category and for the Cadets, the first ten classified and the first female. In the Cadet class, the Swiss Edward Hirsch (Societè Nautique de Geneve) won the first step of the podium, second place for another Swiss, Teo Filliger (CLUB CVN), and third place for Lorenzo Specchia (CV La Spezia). Fourth place for Filippo Osti (C.V.Bellano) fifth classified Lorenzo Trentini, of CV Vernazzolesi, […]
Do you like it?0
Read more
Load more
This template supports the sidebar's widgets. Add one or use Full Width layout.
Questo sito utilizza cookie necessari al funzionamento. Proseguendo la navigazione acconsenti all’uso dei cookie. Chiudi Leggi di più
Privacy & Cookies Policy