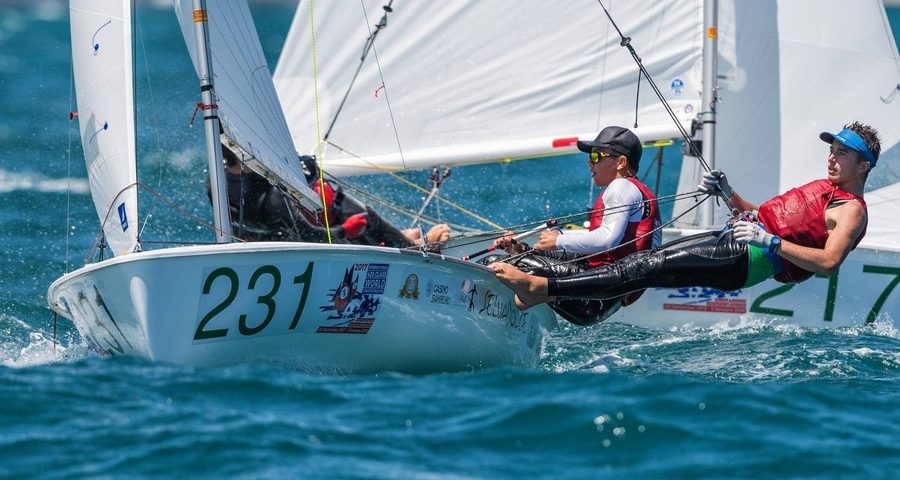 At 6.30 this morning Italian time (1.30 pm in Australia) the crew of the Yacht Club Sanremo composed by Tommaso Cilli and Bruno Mantero won the silver medal at the World Sailing Championship Class 420 under 17.
On 23 December 2017, the Sanremo Yacht Club team started from Nice to Fremantle to compete in the 420-class sailing World Championship. The 420 class is by far the most aggressive youth class with the highest level in the world. A regatta worth a lifetime of sacrifices held in one of the world’s sailing temples, Fremantle (Australia).
Who does not remember the deeds of Australia 2 when I tear the America’s Cup to the Americans and brought it to Fremantle where he wrote the history of sailing. Extreme weather conditions with winds almost always at the limit of the resistance of boats and crews. It was in these historic waters that the World Championship was held which saw the best three crews of the Yacht Club Sanremo come down in the water. Edoardo Ferraro / Francesco Orlando, Andrea Abbruzzese / Fabio Boldrini and Tommaso Cilli / Bruno Mantero. Three crews with assets in the world and European titles, but who must compare with other teams equally titled. The strongest teams in the world, after long selections, give life to a real duel from 29 December 2017 to 3 January 2018. From the first day the Ferraro / Orlando and Cilli / Mantero crews stand out for their respective categories (Open and U17) the 3rd place in the overall classification.
On the second day, the two crews go hand in hand and both jump at the top of the rankings. On December 30th there are two crews of the Yacht Club Sanremo at the head of the World Championship! The following days are followed by very tight regattas with strong wind and wave formed, in which the two crews alternate between the first and third position in the overall classification. The third crew of Abbruzzese / Boldrini some positions further back, but always in the first 20, continues to play an excellent championship, but deserves positions close to the top of the standings.
The third day happens the imponderable, the crew Cilli / Mantero in the test n ° 5 are in second position and in an attempt to overcome the first few meters from the finish they overturn for a very violent burst! They lose 9 positions and finish 11th. This event will probably cost the World Title in Cilli / Mantero.
The crews maintain concentration and keep morale high and the following days fight with all their strength to present themselves on the last day of the championship in the top positions. Cilli / Mantero in 2nd, Ferraro / Orlando in 4th position and Abbruzzese / Boldrini in 17th. The situation for Cilli / Mantero is very difficult, I must not lose concentration; at the start of the 12th and final round of the world championship the first four crews are collected in only 2 points. Who is wrong is out of the title and medals.
In first position the Italian boat of Sposato / Centrone, in second and third position two Spanish boats and in 4th position Cilli / Mantero.
The race starts, the tension is sky-high. The Italian boat of Sposato / Centrone makes mistakes and ends the day with a 13th and a 7th, the two Spanish boats close the day with a 3rd and a 16th the first, while the second with a 2nd and a 2. Cilli / Mantero with a splendid control close with two 4 ° places. It’s a silver medal !!
Tommaso Cilli and Bruno Mantero are vice world champions with only 3 points from the gold medal. A bit of regret for those nine points lost but great pride for a medal conquered with teeth on the other side of the planet in a magical place for sailing as Fremantle.
Ferraro / Orlando depart for last regatta in third position in the U19 and 4th overall rankings. They try everything for everything and win the last race but bitterness is so great when on arrival they tell them their disqualification for early departure. 7th absolute and 6th U19 World Championships close. Excellent result of Abbruzzese and Boldrini who win a very respectable 16th overall and 12th U19.
Behind this stellar result there are many men, women, teammates, sponsors and families that support athletes to bring out the tip of the iceberg. Speaking of women, immense thanks to the coach of the Yacht Club Sanremo, Fernanda Sesto who with his skills forges not only the athletes but the “men” able to face huge challenges for young athletes of 15 years.
This is the comment of the president of the Yacht Club Sanremo, Beppe Zaoli: “Our boys are our pride and our future, we are honored to have athletes of this level that represent us and bring in the name of Sanremo in every part of the world, a thanks to all those who have supported us to realize this dream “.