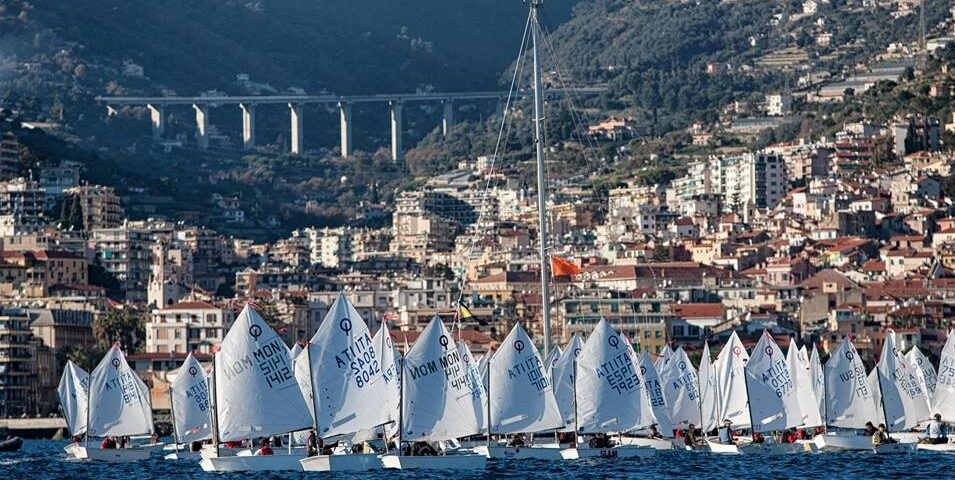 Exceptional weather conditions and great participation were the setting for this traditional event organized by the Circolo Matuziano and now in its thirty-sixth edition. More than 100 Optimists battled it out in six beautiful regattas with winds every day from the west between 12 and 20 knots. Challenging, thanks also to the rough sea of ​​the second day, the regattas were really exciting and many were the compliments made by all the coaches who arrived in Sanremo with their teams. To be awarded, both for the Juniores category and for the Cadets, the first ten classified and the first female. In the Cadet class, the Swiss Edward Hirsch (Societè Nautique de Geneve) won the first step of the podium, second place for another Swiss, Teo Filliger (CLUB CVN), and third place for Lorenzo Specchia (CV La Spezia). Fourth place for Filippo Osti (C.V.Bellano) fifth classified Lorenzo Trentini, of CV Vernazzolesi, sixth Giovanni Castelli (CV Tivano) and seventh classified Carolina Vulcanile (CV Vernazzolesi), in first place in the female ranking. Eighth Carolina Lalla (Italian YC), ninth place for Lorenzo Belviso (CV Alto Lario) and tenth Gianluca Milani (CV Tivano). In the Juniores category, Alex Demurtas, from Fraglia Vela Riva, won first place; second place for the Swiss Simon Mille (CLUB CVE), third classified Alessio Cindolo (Yacht Club Italiano). fourth place for Luca Bongiovanni (LNI Mandello del Lario), fifth place for the Swiss Ulysse Raison (Societè Nautique de Geneve) followed by Switzerland Shari Carrara (Yacht Club Ascona), first classified for women; seventh Leonardo Bonelli (Yacht Club Monaco). Eighth Alessio Lulli (Italian Yacht Club) and ninth place for Leonardo Vanelo, of CV La Spezia. Tenth place for the Swiss Felix Filliger, of CLUB CVN. The award for the youngest ever among all competitors goes to Alessandra Traverso, of CV Vernazzolesi. This year it was the Ascona Yacht Club that won the Dino Minaglia Trophy, named in memory of a great member of the Sanremo Yacht Club who always did his utmost for youth activity, which rewards the best Club that, among the Juniors, obtained the three best results with Shari Carrara, Nicolo ‘Carrara and Valentin Burkhardt. It was a particularly successful edition despite all the COVID measures and protocols to be implemented, to which the Sanremo Yacht Club has dedicated itself with care and attention. All very satisfied, which is why some teams have asked to return to Sanremo in the new year to be able to train. The change of date, carried out for the first time last year, from Christmas / New Year to the Immaculate Conception seems to have given excellent results and next year, hoping to be out of the emergency, we are confident in another great edition.