Negri and Lambertenghi quarters at the first Grand Slam SSL City in Hamburg.

Negri and Lambertenghi quarters at the first Grand Slam SSL City in Hamburg. 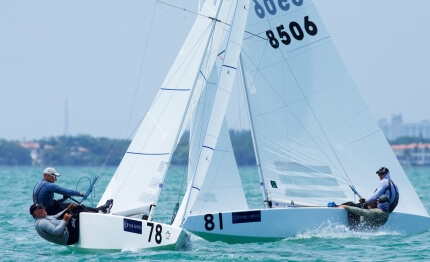 First at the end of the selections, only ones to have direct access to the final four and a mess in the first beat that forces them to chase and close quarters: the Alster lake has brought mixed fortunes to Diego Negri and Sergio Lambertenghi in the week of the first Grand Slam City organized by the Star Sailors League. A dell’Hafengeburstag margin, the great feast of the port of Hamburg, the SSL Swiss organizers have managed to support an SSL signed event that could turn the spotlight to the Star class, the queen at the Olympics for so many decades that from Rio yet no longer present in the Games.

The maximum concentration of stars and amateurs has thus found its expression this week in northern Germany, when 90 sailors, a number closed by the organizer, he has performed in short races in the urban lake of the famous port city, giving the show along five-day event with a full program of events.

After dominating their group and having caught Kusznierewicz and Zycki level on points the penultimate race of the evening, at the end of the preliminary stage, ended on Saturday morning, the Italian duo of Negri and Lambertenghi won the selections, jumping the last very difficult knockout stages and going directly to the final four.

In the last race of the series, Negri and Lambertenghi have met so some of the best all week. Such a small number that was bound to make some discontent in the rich parterre of samples present: in fact, did not have access even to the last phase, to name a few, the new champions of the world Augie Diaz (USA) and Bruno Prada (BRA) , or plurimedagliato Torben Grael (BRA) in crew with Stefano Lillia (ITA), local heroes Johannes Polgar and Markus Koy (GER) and the leader of SSL George Szabo ranking (USA) and Patrick Ducommun (SUI).

The last start seemed still good for Italians second in the world rankings and the skippers of the forward calculated and sponsored by SSL: a good start on the right seemed to see candidates in a memorable location. Then a sudden gust during a maneuver has yawed the Italian Star up to stop it and lose speed and precious meters. A nothing is worth fighting to the end: Negri and Lambertenghi have still not given up and were able at times to recover the margin on third. The podium, therefore, surprised everyone: won Xavier Rohart with Alexis Ponsot (FRA), in trouble in the days before but able to awaken in the last races. Different speech for the latter, Eivind Melleby (NOR) and Joshua Revkin (USA) had already distinguished themselves in starting the series with a battery-row of three consecutive victories. Third, to the detriment of the statistics, the biggest winners of the week: Mateusz Kusznierewicz and Dominik Zycki (POL).

Statements of Diego Negri: “The format was again very exciting both during qualifying batteries in direct eliminations of the final day. It was amazing surf a water surface so narrow with a large crowd of fans who followed the races a few tens of meters, demonstrating that our sport can attract and involve the general public. Too bad for that unexpected gust caught us shortly after the start of the final and compromise a success that we felt now ours, given the excellent placings for the whole week. A farewell to the stage in December in Nassau. “