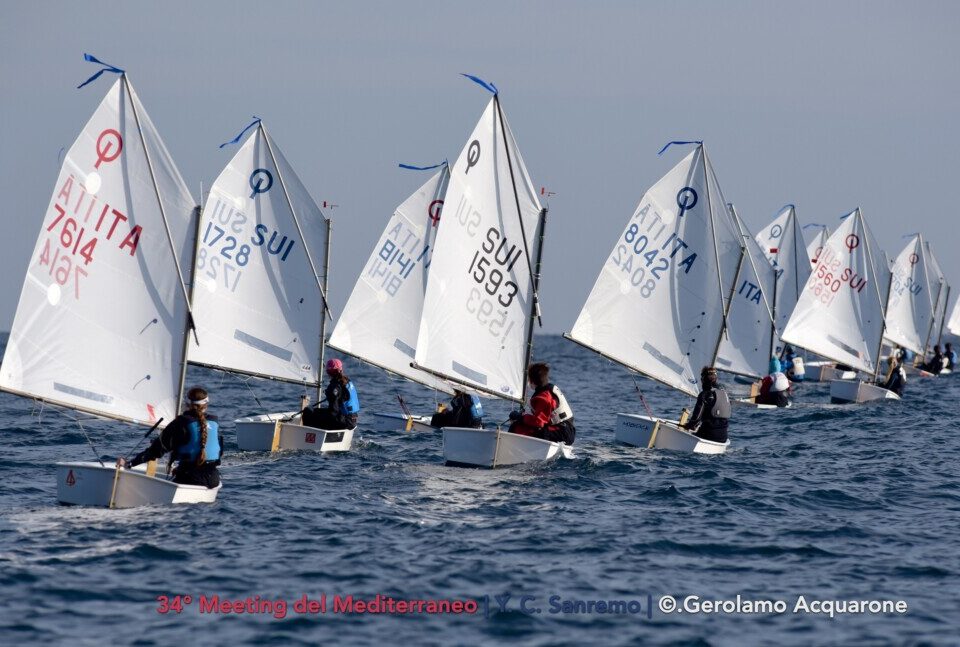 THE SANREMO YACHT CLUB RETURNS LOAD WITH THE 36TH INTERNATIONAL MEETING OF THE MEDITERRANEAN AND VERY NUMEROUS MEMBERS!

Almost one hundred young sailors expected at the 36th International Mediterranean Meeting organized by the Sanremo Yacht Club from 6 to 8 December 2020. In this strange and difficult period, the very young people want to go back to racing, so at the 36th edition there are almost one hundred people enrolled in the classic regatta organized on the Immaculate Conception bridge. Coming from all over northern Italy, France and Switzerland from 6 December they will find themselves in the Sanremo waters to compete for the trophy. Everything is ready to welcome them with the necessary prescriptions and with maximum safety. A big commitment for the Sanremo Yacht Club which has decided to carry on this event to give young people the opportunity to do outdoor sports and be together; and the city to be able to breathe a bit of optimism and movement in such a delicate moment. There […]
Do you like it?0
Read more

Despite the difficult weather conditions it was a beautiful Trophee Grimaldi that took place on the weekend of 2 and 3 November, an event that unites the Circolo Sanremese and the Monaco Yacht Club. Great success with 44 participants from France, Monaco and Italy. On Saturday they expected difficult conditions, instead a nice east wind accompanied the competitors up to Monte Carlo where the M32 Catamaran of Guido Miani of the Monaco Yacht Club crossed the finish line in 10 minutes and 29 seconds, establishing the Race Record . On Sunday, the weather alert did not allow disputing the return race leaving the charts unchanged. The fight for the overall standings was straightforward, with the affirmation of Aurora, Paolo Bonomo and Roberto Bruno, second place for Il Pingone di mare III, Federico Stoppani, and third place for Free Spirit, by Paolo Rossi. All three of the Sanremo Yacht Club In […]
Do you like it?0
Read more

With the Trophee Grimaldi, organized by the Yacht Club Monaco and the Yacht Club Sanremo, the West Liguria Winter Championship starts, now in its thirty-sixth edition; a classic of the autumn and a great event that unites the two prestigious Yacht Club of the riviera. The regatta will leave San Remo on Saturday 2nd November at 12.00 to arrive in front of the Port of Monaco where the boats will be hosted on the docks of the Monaco Yacht Club where the usual party will take place in the evening. Sunday morning the fleet will resume the route to Sanremo where, at the end of the race, the award ceremony will take place at the headquarters of the Sanremo Yacht Club. Many favorites from France, Monaco and Italy will fight for the victory of the Grimaldi Trophy. Now in its 10th edition, the Trophée Grimaldi combines the increasingly relationship and […]
Do you like it?0
Read more

The opening day of the IRC Europeans, hosted by Italy’s Yacht Club Sanremo, got underway under sunny skies, scorching temperatures but nearly no wind. The high-pressure bubble hovering over southern Europe blocking out any breeze from the race area. After the morning briefing, that gathered the crews from the over 40 participating teams on the Racing Village next to the Yacht Club, the Race Committee sent them out on the water to try and start a race. But, after some waiting the, the wind didn’t materialise and boats were sent back to the marina.  And finally after another long postponement, at around XX, the organisers had to give up hope and declare it a day. “We tried and tried. At one point we had some 6 to 8 knots from the east and launched a start procedure, but we had to abort it because the wind was too shifty and […]
Do you like it?0
Read more

One of the key racing events in Europe is just a few days away. Organised by Yacht Club Sanremo in co-operation with Italy’s UVAI (Unione Vela d’Altura Italiana) and France’s UNCL (Union Nationale Course au Large) the IRC Europeans are in fact scheduled for next week, from 23 through 29 June. Around 50 boats have registered, with teams coming from Italy, France, Switzerland, the UK, Russia and from as far as the British Virgin Islands, with a high level of competition in all classes. Interesting to note that in Sanremo five TP52s, among the fastest and most spectacular boats of the international racing circuit, will be battling for the title: Howard Dyer’s Rowdy Too from the BVI, Russian flagged Freccia Rossa skippered by Vadim Yakimenko and representing the Moscow Yacht Club; Gianpiero Russo’s Macchia Mediterranea from Naples’ Reale YC Canottieri Savoia as well as the two French teams Gérard […]
Do you like it?0
Read more 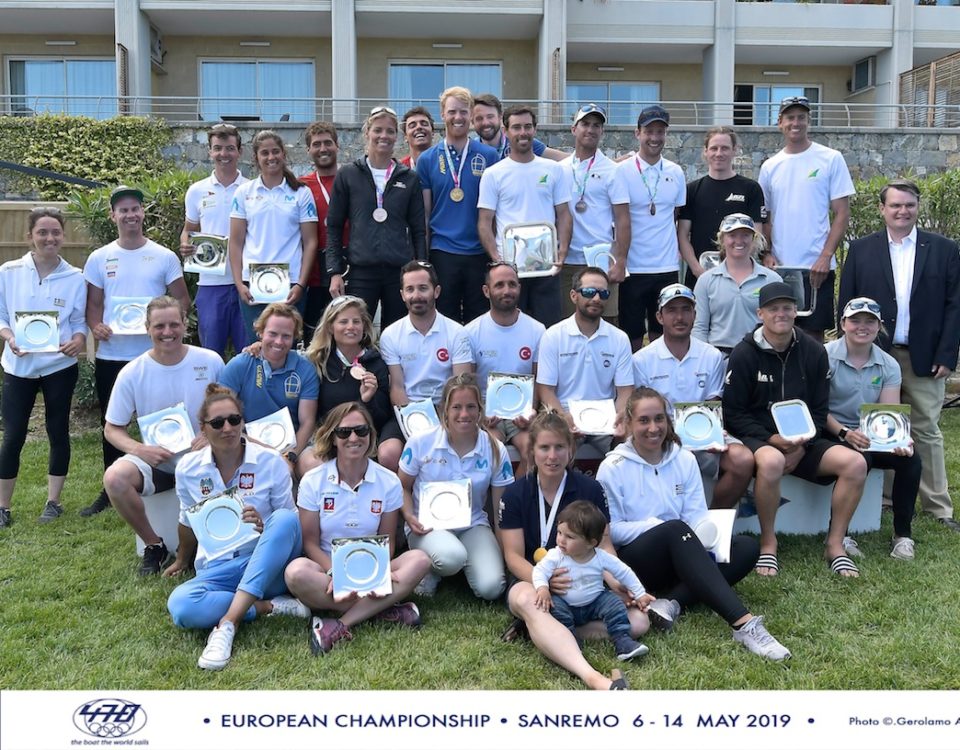 France and Sweden shine at the 470 Europeans

Two medal races, sailed in perfect Mediterranean conditions, wrapped up the 470 Europeans, organised by local Yacht Club Sanremo and Marina degli Aregai, in co-operation with the national and international 470 class. At the eve of the grand finale, both the men’s and the women’s top ten standings were so close to give everyone a chance to grab a medal, adding expectation to the mix. Despite some hours’ waiting, shortly before 2 p.m. the wind set and enabled the Race Committee two launch the medal races on windward/leeward course, that were concluded in less than half an hour.   Ladies kicked-off first, in a nice westerly, with an intense start. France’s Camille Lecointre and Aloise Retornaz took the lead, carefully covering their closest rivals Afrodite Zegers/Lobke Berkhout from the Netherlands and Poland’s Agnieszka Skrzypulec and Jolanta Ogar, with British Hannah Mills and Eilidh McIntyre trying to get free from […]
Do you like it?0
Read more 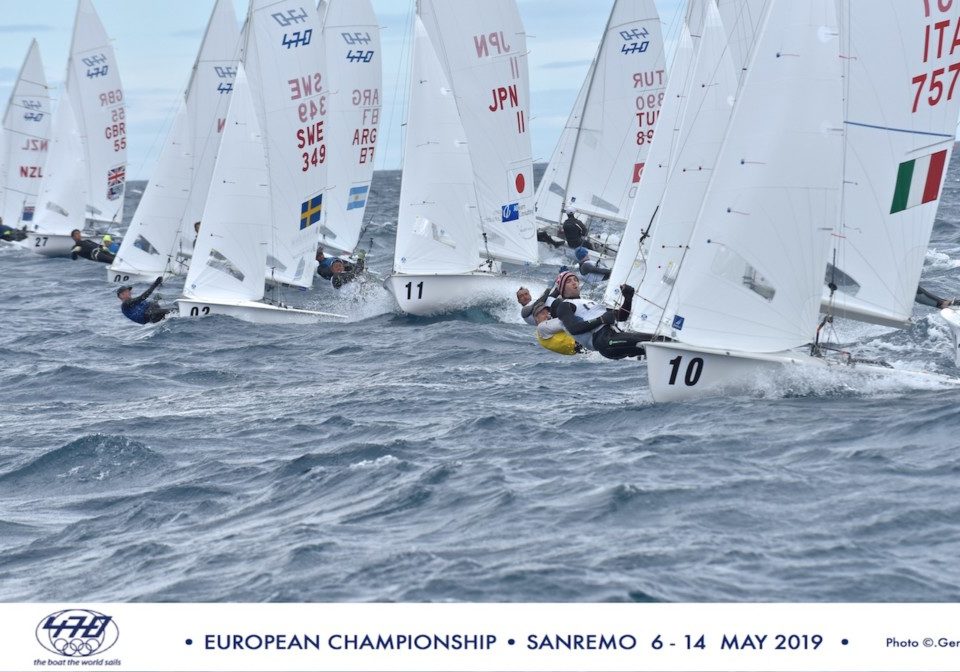 Tough conditions on Day 4 of the on Day 3 of the 470 Europeans, organised by local Yacht Club Sanremo and Marina degli Aregai, in co-operation with the national and international 470 class.   The men’s Gold and Silver fleets and the women had their first race of the day in the late morning in some 15 knots of wind that kept increasing and exceeded 25 knots, putting the crews to the test and causing several capsizes, including the one by the Swedish Dahlberg/Bergstrom, who were forced to abandon the race. Given the conditions, the Race Committee called a stop and the crews went back to the marina. After some waiting they headed out at for a 17:00 start. The fifteen/twenty knots of the beginning soon turned into over thirty knots, making it for a challenging race for everyone and causing some equipment failures, including a broken mast for […]
Do you like it?0
Read more 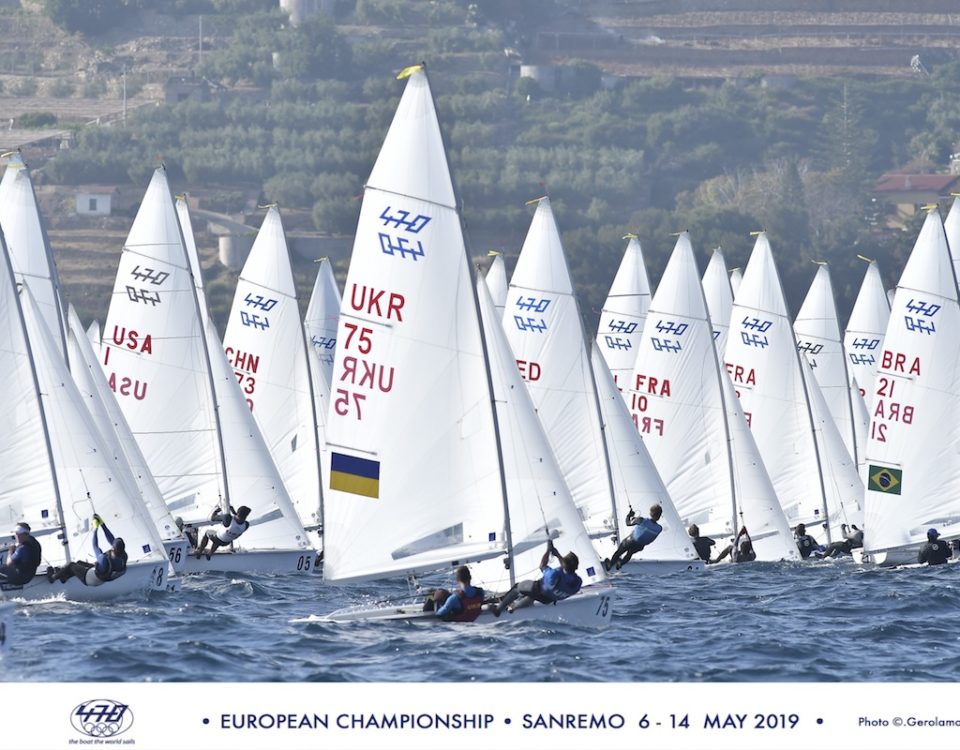 Perseverance was needed, but patience was rewarded with exciting racing on Day 3 of the 470 Europeans, organised by local Yacht Club Sanremo and Marina degli Aregai, in co-operation with the national and international 470 class. Several hours of waiting ashore for organisers and sailors , but then breeze picked up and at around 18:10 the Race Committee was able to launch the first and only race of the day for both the men/mixed and women fleets. In a warm late afternoon light, with an easterly of 10 knots that progressively reached 15 knots the first group to start was the yellow, shortly followed by the blue and finally by the women. All in all racing was over in around 40 minutes. Today’s race contributed to better shape the provisional standing, wrapping up the men’s /mixed teams’ qualification. All the crews proceed to the finals and have been divided into […]
Do you like it?0
Read more
Load more
This template supports the sidebar's widgets. Add one or use Full Width layout.
Questo sito utilizza cookie necessari al funzionamento. Proseguendo la navigazione acconsenti all’uso dei cookie. Chiudi Leggi di più
Privacy & Cookies Policy